‘Together’ Is A Surprisingly Interesting Collection Of Jazz Covers

All the latest reviews and news in entertainment

‘Together’ Is A Surprisingly Interesting Collection Of Jazz Covers 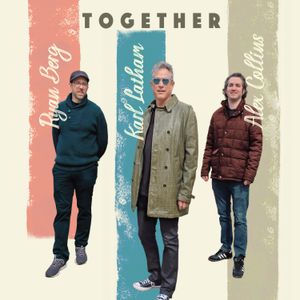 Earlier this month, the trio of Karl Latham, Alex Collins, and Ryan Berg released its first-ever record together.  The group released the record, Together, June 12 through Dropzone Jazz Records.  The six-song record is one more of so many covers collections released by artists within the jazz community this year, but is still a relatively interesting presentation.  That is due in part to the songs featured in the 52-minute record.  They will be discussed shortly.  The arrangements thereof are themselves important to the collection’s presentation and will be discussed a little later.  The record’s production rounds out its most important elements and will be discussed later, too.  Each item noted is important in its own way to the whole of this presentation.  All things considered, they make Together another interesting addition to this year’s field of new jazz covers compilations and a presentation that is worth hearing at least once.

Karl Latham, Alex Collins, and Ryan Berg’s debut outing, Together, is a presentation that most jazz fans will agree is an interesting addition to this year’s field of new jazz covers collections.  That is proven in part through the record’s featured songs.  The songs in question are considered to be jazz standards, thought maybe one of the six –‘Stella By Starlight’ – is really truly well-known.  The other songs – ‘Alone Together,’ ‘On Green Dolphin Street,’ ‘Polka Dots and Moonbeams,’ ‘Night Dreamer,’ and ‘Invitation’ – are not as commonly played on jazz stations, ironically.  This is despite the fact that they were crafted by and performed by some very well-known figures.  ‘Night Dreamer’ for instance, was composed and recorded by saxophone great Wayne Shorter.  While popular, it is less well-known than other songs from Shorter, such as say ‘Apple,’ ‘Speak No Evil,’ and ‘Juju.’  To that end, Latham, Collins, and Berg have introduced here, a song that is maybe a standard, regardless, but still one that has received less attention than other Shorter standards over the years.  This makes the song a positive in its introduction/re-introduction.

‘On Green Dolphin Street’ is another standard that despite having that attribution is maybe not as well-known as other jazz standards.  Miles Davis is credited with bringing the song (originally composed by the team of Bronislaw Kaper and Ned Washington in 1947) to real prominence.  Even keeping that in mind, it has never been considered to be one of Davis’ own greatest hits.  So once again, presenting this “standard” here is a positive way to introduce the song perhaps to a whole new generation of jazz fans and maybe even reintroduce another generation to the song.

Much the same said of ‘On Green Dolphin Street’ and ‘Night Dreamer’ can be said of ‘Polka Dots and Moonbeams.’  It is another song that despite being called here a “standard” has never really gotten the attention of other well known jazz standards.  In this case, that is especially so, considering that the song – originally composed by the team of Jimmy Van Heusen and Johnny Burke in 1940 – was made most famous thanks to Frank Sinatra.  A look at any collection of Sinatra’s biggest hits will reveal that this song is not on any of those collections. So calling the song a standard is somewhat inaccurate.  Even with this in mind, its inclusion in this collection is still positive because it introduces the song to a whole new generation of audiences as well as re-introducing it to its original audiences, just as with the other songs noted here and the compilation’s other trio of songs.  Keeping all of this mind, the songs that are featured in Together may not necessarily be standards in the purest sense, but are still positives because of that very same fact.  On a side note, the credits for the original works are not listed in the compilation’s packaging.  This is something that really needs attention, considering that they are covers.  Credit needs to go where deserved for the original works.

The songs featured in Together serve as a positive starting point for the record, and are just a portion of what makes the record worth hearing.  The performances thereof build on the record’s presentation from there.  Case in point is the trio’s performance of ‘Stella by Starlight.’  Victor Young’s original composition is just short of the four minute mark and is a clear, light jazz composition.  The piano-driven piece has a nice, gentle swing at its heart.  The famed rendition featuring legendary singer Ella Fitzgerald shows how much stronger the composition becomes with vocals.  By comparison, the rendition performed by Latham/Collins/Berg is a much longer piece, clocking in at more than nine minutes (nine minutes, 22 seconds to be exact).  Some hint of Young’s original is there.  At the same time though, the trio has given the composition a much more modern sensibility here, beginning with the piano run that opens the song.  The use of the bass and piano as the song progresses maintains that more modern sense.  The subdued nature in the trio’s performance adds even more to the rendition’s unique presentation, making for even more reason to listen, even as long as the song is here.

The trio’s cover of the Bronislaw Kaper/Paul Francis Webster composition ‘Invitation’ (which closes out this compilation) is more proof of the importance of the record’s featured performances.  The original composition barely tops the three minute mark at three minutes, 13 second.  The updated take featured here runs more than nine minutes at nine minutes, 46 seconds.  In the course of that time, Latham and his band mates took the original, which boasted more of a hybrid jazz/modern classical style approach and sound, and turned it more into a sort of bossa nova style work.  It is a complete change of pace here.  That much more upbeat approach in this rendition gives the whole a whole new identity.  That in itself is certain to generate plenty of discussion among audiences.  It shows that much more, why the performances featured in this recording are so important to its presentation and certainly not the last.  The group’s performance of Arthur Schwartz and Howard Dietz’s ‘Alone Together’ is yet another example of that importance.

As with the other renditions examined here, the version presented in this collection is much longer than the original.  The original song, which is a gentle, clarinet-centered work, runs only two minutes, 32 seconds in length.  By comparison, the version presented by Latham, Collins and Berg easily exceeds that run time, clocking in at seven minutes, 54 seconds.  The clarinet featured in the original composition is replaced here by Collins’ work on piano, while Latham keeps time on the drums.  Berg’s subtle bass line adds its own touch to the song.  Even though the trio does stay largely true to the source material, the completely difference instrumentation gives the song its own unique identity, once again showing the importance of the performances here.  Collins’ runs and oftentimes semi-Latin influence on the piano line adds even more to that noted statement about the song’s identity here.  It all comes together to make this performance quite the interesting take on the classic song.  When this and the other performances examined here are considered along with the record’s three other performances, the whole makes this record’s featured performances just as important to the presentation here as the songs themselves.  The production put into each performance featured here puts the finishing touch to the collection and completes the record’s presentation.

The production used in Together is important to examine because of its role in the record’s general effect.  Each performance is so subtle throughout.  This means that the utmost attention had to be paid to the balance in each musician’s part alongside one another.  Luckily, that work paid off, too.  The focus and painstaking efforts resulted in songs that even being covers fully immerse listeners into each work and leaving them feeling fulfilled from one to the next.  That balance, along with the attention to the dynamics in general from each musician results in the best possible impact.  Keeping all of this in mind, everything examined here makes Together a positive addition to this year’s field of new jazz and overall compilation records.

Together, the new compilation record from Karl Latham, Alex Collins, and Ryan Berg, is an interesting addition to this year’s field of new covers collections.  The record’s interest is due in part to its featured songs.  The songs in question are considered “standards,” but in reality are less well-known than many other jazz songs composed and performed by those involved.  So in reality, the presentation of these songs is an introduction for many and a re-introduction to others, to songs that in reality are not really standards in the purest sense of the term.  The performances of the collection’s featured songs are quite different from their source material, giving each song a new identity.  That is not necessarily a bad thing, either.  That is because even having those new identities, the performances still strive to stay as true as possible to the songs’ source material.  The production of the featured performances puts the finishing touch to the record.  That is because it ensures each song offers the most immersive experience possible, and succeeds in doing so, too.  Each item noted is important in its own way to this collection.  All things considered, they make Together a collection that is worth hearing occasionally, even being a collection of covers.  Together is available now.  More information on the collection is available at https://karllatham.com/alex-collins-ryan-berg-karl-latham.