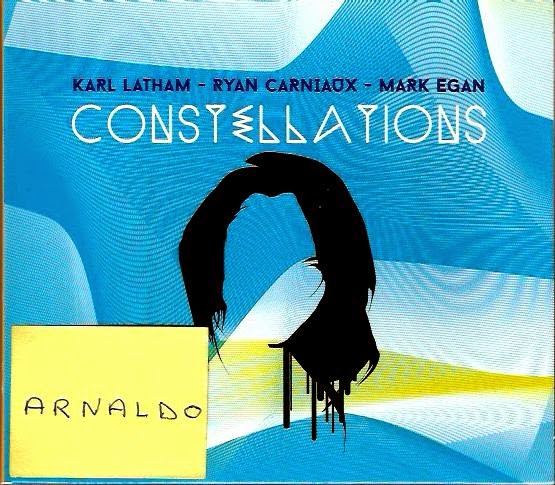 The Icelandic singer Bjork has created her own universe with her music and performances that are both exciting and original, but have not found a better jazz interpreter until now with “Constellations.” Curiously, I was expecting to find songs from Bjork’s early solo albums as “Debut”, and mainly from the mid- to late 90s Deodato-arranged trilogy of “Post,” “Telegram” and “Homogenic” (to which Brazilian genius Eumir Deodato added sumptuous orchestral arrangements). Things like “Isobel,” “Hyper-Ballad” and “Possibly Maybe.” Instead, Latham opted for more recent tunes.

Master drummer Karl Latham has been a Bjork fan for many years. Karl’s “Resonance,” released by Dropzone Jazz Records in 2007, included a cover version Bjork’s “Pagan Poetry.” Her “Volta” album was released that same year, and triggered an urgent desire in Latham not just to cover the songs but also to create compositions inspired by Bjork, which the group Constellations created for this first release, packaged in a beautiful artwork by German artist Knut Schötteldreier, who have prepared the covers for several productions I did for Verve.

Latham shared his thoughts and plans originally with his long-time friend and colleague bassist Mark Egan, his partner on the “Unity 1” trio project (with guitarist John Hart). His enthusiasm was contagious and they considered who else could fit into this creative concept. They found another partner during a recording session with the up and coming virtuoso trumpet player Ryan Carniaux, a rising star that follows a more “European style,” with a loud a clear open sound, something that is a blessing in an era of so many bop rooted trumpeters.

It soon became apparent that master keyboardist Nick Rolfe, whom Karl and Mark knew from many joint performances, would be a perfect choice for the project. Rolfe, that often uses Rhodes, knows how to work with “sound colors” and paints many exhilarating landscapes. When the universe aligned in the Spring of 2013, with sound engineer Jeremy Gillespie on board, they created these groundbreaking interpretations of Bjork’s musical cosmos.

A fascinating portrait of a singer and her music emerged from these sessions. My personal favorite tracks are the opener “Hope,” “Wanderlust” — the perfect synthesis of Bjork in a jazzy vision as well as of “jazz meets drum ‘n’ bass,” with Nick using Rhodes sounds and a Nord organ that sounds like an Arp Strings synth, while Ryan applies electronic devices to his trumpet –, the 11-minute long track “Desired Constellation” (where the Zawinul textures, reminiscent of his work with Miles, become more evident), “The Dull Flame of Desire” (I only regret the fade-out), the ambient mood journey of “I See Who You Are,” the Moog adventure on “Alugsukat” and the way Egan’s fretless sings on “Ostara.” But the whole album is a highlight, certainly one of the best releases of the year.

The bass lines, with Egan’s signature fluid sound on his fretted and fretless green Pedulla 5-string basses, at times repetitive and then again free flowing, weave through the solid creative grooves created by Latham’s masterful drumming. The powerful trumpet playing by Ryan Carniaux interprets Bjork’s voice but never mimics it literally. The multi-layered keyboards of Mr. Rolfe support the quartet like a flying sound carpet. The combination of all four musicians creates the hovering thick atmosphere of the “Nordic” sound, which reminds you incessantly of Bjork and her performances.

Karl Latham, initiator of the project, is a world-class drummer who has performed and recorded with Don Braden, Joel Frahm, Andy Snitzer, Claudio Roditi, Clark Terry, Joe Lovano, Michal Urbaniak and rock icon, Johnny Winter. He tours internationally with the group Unit 1 and can be heard on numerous CDs.

Mark Egan is one of the top contemporary bassists. A disciple of Jaco Pastorius and for many years a member of the original Pat Metheny Group as well as of The Gil Evans Orchestra. Egan has also performed and recorded with David Matthews, Joe Beck, Chroma, Pat Martino, Larry Coryell, John Abercrombie, Bill Evans, Randy Brecker, Lew Soloff, the Elements group that he co-leads with drummer Danny Gottlieb, and most recently with the CTI All-Stars band. He has also recorded with Sting, Joan Osborn, John McGlaughlin and Marc Cohen, among others.

Ryan Carniaux from Providence, Rhode Island, studied music at Berklee in Boston. He currently lives in Cologne, tours throughout Europe and the USA and is considered a rising star among young trumpet players. He is Professor of Jazz Trumpet at the Folkwang University of the Arts. He has played with numerous German musicians including Wolfgang Lackersmid and internationally with Dave Liebman, Jerry Bergonzi, Mark Murphy and Benny Golson.

Nick Rolfe was born in Philadelphia, Pennsylvania, and grew up in Seattle, Washington. He started classical piano lessons when he was six years old. He studied in New York and has been seen and heard time and again with musicians from Slide Hampton to Roy Hargrove as well as Lizz Wright, India Arie and Nona Hendryx. He is also a successful actor and has appeared in various TV and film productions.