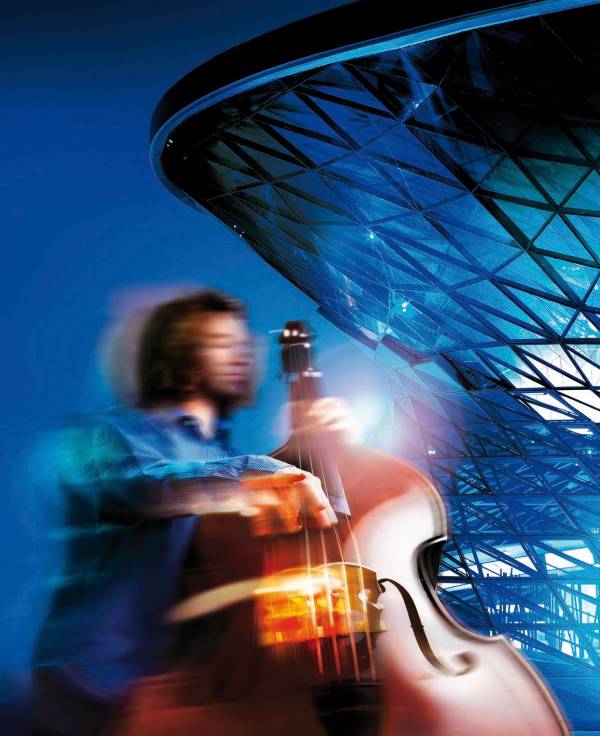 Munich. The BMW Welt Jazz Award will enter its eighth season in January 2016. Following the motto “Inspired by Legends”, six outstanding international ensembles will be presented at the double-coned structure of BMW Welt in a total of six free Sunday matinees between January and March 2016. The featured musicians come from the US, Israel, Switzerland, Italy and Germany. In addition, this new season will see the inauguration of the BMW Welt Young Artist Jazz Award, presented as a collaboration of BMW and the city of Munich. The final concert and competition for the BMW Welt Jazz Award’s prize money totalling 15,000 Euro will take place on May 7, 2016 at the auditorium of BMW Welt.

This year’s motto will focus on the influence of outstanding personalities. In their innovative live performances, the participating artists will give a taste of how various inspirations from disciplines other than jazz can be interpreted.

After the sixth and last matinee, a panel of expert jurors will nominate two of the participating ensembles to perform the final concert at the auditorium on May 7, 2016. In addition to a prize of 10,000 Euro, the winner will receive a trophy designed specially by BMW Design; the runner-up will receive 5,000 Euro. The ensemble with the best combined average of all concerts will receive the audience award which includes an appearance at the Jazz Classica Festival 2016 at resort Schloss Elmau.

Maximilian Schöberl, Senior Vice President, Corporate and Governmental Affairs, BMW Group, said, “In its eighth season, the BMW Welt Jazz Award is looking back on a great tradition while being oriented towards the future. For more than forty years, BMW Group has been a consistent partner of hundreds of cultural initiatives. We want to continue to inspire all visitors. An initiative which has established itself across the country would not be possible without the engagement of our international ensembles and our panel of expert jurors.”

For the very first time, this coming season will see the inauguration of the BMW Welt Young Artist Award, presented in cooperation with the city of Munich. “As mayor of the city of Munich, I am delighted that starting this year, BMW Group will expand its BMW Welt Jazz Award by adding a special advancement award for Munich’s up-and-coming-jazz musicians. It is yet another reminder of how great a value this company places on its social responsibility and its long-term commitment to promoting culture,” added Dieter Reiter.

In addition to receiving prize money, the winner will be awarded the opportunity to give a concert at Munich’s jazz club “Unterfahrt” as well as to appear at the jazz festival in Leipzig. All young jazz musicians, individuals and ensembles alike, hailing from the greater Munich area are eligible. Candidates will be selected by the members of the expert jury of the BMW Welt Jazz Award.

Admission is free of charge but seating is limited. Tickets are subject to availability. Doors open at 10.30 am.

Grand finale at the auditorium of BMW Welt at 7 pm

As in previous years, the programme will be hosted by Beate Sampson, jazz expert and editor at the German broadcasting station “BR-KLASSIK”.

The distinguished panel of expert jurors will be headed by Oliver Hochkeppel (journalist for music and cultural affairs at the German daily “Süddeutsche Zeitung”) and will include the following members:

Andreas Kolb, editor-in-chief of the magazines “JazzZeitung” and “neue musikzeitung and co-publisher of the new music magazine “SILBERHORN“;

Heike Lies, musicologist, Music and Music Theatre Division of the Department of Cultural Affairs of the state capital Munich;

In “My Beethoven”, bassist Dieter Ilg together with the other two members of his trio, pianist Rainer Böhm and drummer Patrice Hèral, transforms Beethoven’s music into timeless jazz. Originally from the city of Freiburg, this musician has worked alongside famous musicians such as Randy Brecker, Albert Mangelsdorf and Charlie Mariano, and he has been working as Till Brönner’s bassist of choice. Since the early 1990s, he has been working on the transformation of other music styles into jazz, and in 2010, he made his own wish come true by transforming Giuseppe Verdi’s “Otello”. Ever since, Ilg’s trio has maintained this new outlook on classical music, which most recently led to the publication of Wagner’s “Parsifal”. For both of these works, “Otello” in 2012 and “Parsifal” in 2014, Dieter Ilg was awarded “Bassist of the Year” at the German music award “Echo Jazz”.

The famous tales of “The Arabian Nights” is the theme of the first album “Like A Great River” by Israeli saxophonist Oded Tzur. The melodies change from meditative flow to rapid dynamism creating a musical link between the Orient, the Occident and the artist’s chosen home of North America. In Munich, Tzur will be accompanied by bassist Petros Klampanis, Shai Maestro, expected to be the next shooting star of the piano world, and another well‑known musician linked to numerous big stars of the New York scene, drummer Ziv Ravitz.

For many years, Italian pianist Stefano Battaglia has been active in the field of musical rendering of both literature and film. As early as 2007, he dedicated a double album to the great author and producer, Pier Paolo Pasolini. Battaglia’s latest project, recorded with his regular trio including bassist Salvatore Maiore and drummer Roberto Dani, includes interpretation of works by Alfred Kubin, Jonathan Swift, Italo Calvino, Edgar Allan Poe, Adalbert Stifter and Homer. His other recent album, “In The Morning“, is devoted to the music of Alec Wilder, the American composer of theatre and film scores, who died in 1980.

As an iconic guitar player, Jimi Hendrix is famous far beyond the world of rock music, which is why many jazz musicians keep returning to his music. Almost twenty-five years ago, Swiss guitarist Christy Doran, together with different musicians, began his own Hendrix project, combining melodies and riffs with songs such as “Hey Jude” by the Beatles or “Purple Rain” by Prince and to which he added complex rhythms. During this year’s BMW Welt Jazz Award, his partner will be American-Swiss singer/performer Erika Stucky, who for many years has been famous for her unique mix of entertainment, pop music and avant-garde jazz. The quartet is completed by American E-bassist Jamaaladeen Tacuma and Swiss drummer Fredy Studer.

With her unique voice and unconventional performances, Icelandic artist Björk became her nation’s most famous musician, who gathered fans from outside the world of pop music the world over. One of them is 54-year old American drummer Karl Latham, who, together with his quartet members bassist Mark Egan, trumpet player Ryan Carniaux and keyboard player Nick Rolfe, recorded an entire album of works written by Björk only. In “Constellations”, a work of fusion jazz, they combine Björk’s musical cosmos and her unique timbre with a wealth of synthetic sounds reminiscent of Japanese artist Isao Tomita or Miles Davis’ electric bands.

For New York-raised singer Indra Rios-Moore, daughter of a Puerto-Rican social worker and jazz bassist Don Moore, her new album “Heartland” is an exploration of her roots. Her reduced retro sound includes references to great musicians from the world of pop and rock music such as David Bowie and Pink Floyd. Today, she lives in Denmark with saxophone player Benjamin Traerup, but for the recordings under the direction of star producer Larry Klein she made her way back to the US. Her quartet, the winner of the Danish Music Award 2012, will be completed by bassist Thomas Sejthen and guitarist Uffe Stephen.

This edition of the BMW Welt Jazz Award will once again enjoy the generous support of BR-KLASSIK, the new music magazine SILBERHORN, resort Schloss Elmau and the Department of Cultural Affairs of the city of Munich.

and via LoeschHundLiepold Kommunikation GmbH