“Constellations” released in Germany,Switzerland and Austria 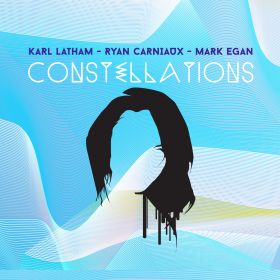 The Icelandic singer Björk has created her own universe with her music and performances, which has no precedence and has not found an adequate imitator until now either. A woman who made music from a very early age and has not neglected to try almost everything with respect to style. However, she always went to the limits of reasonableness by mixing sounds and genres long enough until she felt comfortable in her own world of sound. In doing this, she took things from all places where she saw chances and possibilities for her own statements. Without consideration for the rules of pop business, she violated all conventions, angered fans with her about-faces and found new ones. Björk has not only divided music aficionados into Björk opponents and Björk fans, but also her fans into “part-time” fans, who loved one album and ignored the next at best. But all agree on one thing: she is one of the most creative musicians of the last decade.
The fact that jazz musicians time and again play cover versions of Björk songs is understandable against this background. Jason Moran, Greg Osby, Dave Douglas, Gretchen Parlato, The Bad Plus, Jeff Tain Watts and many others have reworked Björk songs.  In addition, Björk repeatedly engaged jazz musicians for her music, e.g., Oliver Lake, Zeena Parkins and Mike Patton. Karl Latham has been a Björk fan for many years, and a CD was already released by Resonance Records in 2007, on which a he played a cover version of the Björk song Pagan Poetry. Björk’s album “Volta” was released the same year, and triggered an urgent desire in Karl Latham not just to cover the songs, but also to create a few compositions as–so to say–”commentary”. However, also as interpretation of Björk’s complete musical cosmos. The CD ran for a long time as if in an “endless loop” until Latham had the feeling to be getting near to the core. Only then did he share his thoughts and plans, first with his long-time companion and friend, the bassist Mark Egan. He was immediately filled with enthusiasm, and together they considered who else could fit into the concept. They found the right partner during a recording session: the young and up-and-coming trumpet player Ryan Carniaux. It was soon also clear that keyboarder Nick Rolfe, whom Karl and Mark knew from many joint performances, should be on board.
It was finally time in the spring 2013; they went with sound engineer Jeremy Gillespie into Barbershop Studios. A fascinating portrait of a singer and her music was created, who has exercised such strong influence. The focus on rhythm is fascinating, rhythm that already distinguished the album “Volta”. Bass lines, at times repetitive and then again free flowing to meander through these meters. The clear, powerful trumpet, which interprets Björk’s voice but never mimics it. A keyboard sound that carries the quartet over the air like a flying sound carpet. And then it is there: the hovering thick atmosphere of “Nordic” sound, which reminds you incessantly of Björk and her performances.
Karl Latham, initiator of the project, is a very versatile drummer, who has worked with musicians from Claudio Roditi to Clark Terry, but also–among others–with Joe Lovano, Michal Urbaniak, Don Braden and even rock musicians such as Johnny Winter. He has toured internationally and can be heard on numerous CDs.
Mark Egan is one of the most well know living e-bassists. He was a student of Jaco Pastorius and many years a member of the Pat Metheny Group, bassist in the Gil Evans Monday Night Orchestra and the George Gruntz Concert Jazz Band. He has also worked in the studio with Sting and Marc Cohn, among others.
Ryan Carniaux from New York studied in Berklee and then switched to Maastricht (NL). He currently lives in Cologne and is considered a rising star among young trumpet players. He has played with numerous German (Pablo Held, Norbert Stein) and international (Mark Murphy, Benny Golson) jazz musicians.
Nick Rolfe was born in Philadelphia, Pennsylvania, and grew up in Seattle, Washington. He already had (classical) piano lessons when he was six years old. He studied in New York and has been seen and heard time and again on the side of known musicians from Slide Hampton to Roy Hargrove as well as Lizz Wright, India Arie and Nona Hendryx. He is also a successful actor and has acted in various TV and film productions.